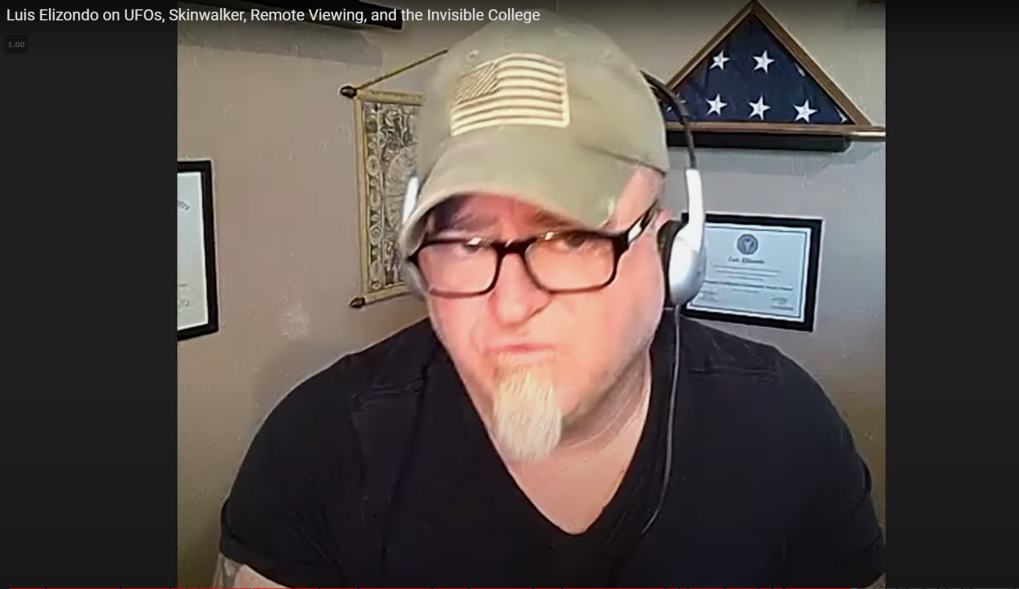 The public-sanitized version of a rushed government UFO report is about to come to us from congress. Its press coverage won’t be anything like this:

Reporter: “Excuse me, Mr. Rubio, does the US have secret alien technology that China or Russia could steal and use to destroy the US?”

Mr. Rubio: “Yes, and thanks for asking. This technology makes the H-bomb look like a toy. We’ve been retro-engineering it for over 50 years in a secret underground operation that’s now a division of Skunkworks and legally exempt from the freedom of information act.” Mr. Rubio looks into the camera. “Any nations wishing to infiltrate this organization are advised to bribe or threaten the CEO of Lockheed Martin.”

Assuming for the moment that these widely held beliefs are true, most of us would agree that officially blabbing it all to the press might be unwise.

Full UFO disclosure, whatever the whole truth might be, probably resembles most everything else of importance: a choice between the lessor of two evils or between the greater of two mutually exclusive goods. Few major changes are either all good or all bad.

“Do these glasses make my nose look big?”

“Don’t sweat it kid, your nose is an aircraft carrier.”

As you may know, Luis Elizondo is extremely careful not to say anything that would violate his non-disclosure agreement with the US Government. I’ve heard him interviewed many times and he usually tries to avoid even giving his own opinions on things. He regularly shakes his head and tells the interviewer, “I don’t know.” A possible exception to this would be his interview with Richard Dolan that was exclusively viewed by members of his website only. A transcript of it with insightful audio commentary is linked here, if you’d like some interesting UFO reading.

Sometimes Lue Elizondo looks as though it pains him to hold back what he knows. But if he blabbed it, he would go to Jail or exile, and the mainstream media would, to the best of their ability, discredit everything he’s ever done.

Recently Lue was interviewed by Curt Jaimungal, a young man with no background in UFOs. Leu was sleep-deprived from the start, I think, and said he was low on caffeine, so by the end he was dragging, and it seems that Lue let the cat out of the bag like never before.

Near the end of the 81 minute interview, Curt repeats a question that Lue had earlier declined. Mr. Elizondo is visibly exhausted…

Curt Jaimungal (@: 1:11:15 on the video): If the general public knew or saw what you saw, what would the next week look like? How would the public react?

Luis Elizondo: Somber… uh, I think there would be this big exhale for about a day. And then this turning inward and then trying to reflect on what this means to us and our species and ourselves. I think, uh, also….

Luis Elizondo: Somber, meaning serious. Not like Hollywood portrays, people partying in the streets and silliness. I think you would have some people turning perhaps to religion more-so. You might have some people turning away from religion. I think you’re going to have… uh… at that point the philosophical and theological questions will be raised and people will have some serious soul searching to do. No pun intended. And I don’t think that’s bad, by the way. I think a lot of folks who have spent their time in this community being charlatans will be exposed and they will be probably unemployed. They’ll probably have to change their names because, you know, the rest of society will look at them in an unfavorable light. I think there are some unsung heroes that will probably come to light and the world will appreciate their contributions to this topic. I think the scientific and academic community will…

Luis Elizondo: No, I can’t give you those names.

Curt Jaimungal: I know. I was going to say, names that have been announced before. The unsung heroes are new names?

Luis Elizondo: Yeah, names that haven’t been announced before. New names. Uh, I think the scientific and academic community is going to have to take a real hard look at itself and see why it repeated the same mistakes that it did when Galileo proposed that the Earth was not the center of the solar system. You know, hubris is a big part of that. And then I think, you know, maybe we start the international conversation. Say… OK, we realize that there are things out there that are probably way beyond our petty discrepancies that we have with each other. Maybe we need to really start working together on this. Realize that we really are a global family. It doesn’t matter where you’re from, or it doesn’t matter what your religion is, your culture or your color or anything else. We are all brothers and sisters on this tiny little rock we call Earth, this pale blue dot that’s hurdling through space. Uh…

Curt Jaimungal: It may unify us.

Luis Elizondo: Well, I would certainly hope so. Unless we allow our poor nature to interfere, and we look at this as opportunities to subjugate each other. I would hope that’s not the case.

Let’s think about this. If the truth that Mr. Elizondo can’t tell us is that the US government or any other known Earthly government has made scientific breakthroughs that account for the well documented physics-defying characteristics of UFOs, would anyone look inward at their own religious beliefs? Would nations and individuals realize we’re all brothers and sisters?

So this man seems to know that UFOs represent “off-world vehicles not made on this earth,” as Dr. Eric Davis put it to the NY Times last year. And if Dr. Davis was talking about human technology constructed on a secret orbiting space station or on a secret Moon base, would learning about this cause anyone to stop feeling racial or religious animosity toward others?

So Luis Elizondo is (inadvertently?) implying he knows that Aliens exist and are responsible for at least some of the UFOs that the government tells us are real and of unknown origin. If you see him as the honest, sincere and objective man he portrays, then his words are probably a lot closer to full disclosure than the official congressional report we’re told to expect later this month.

But like everything else, this argument has at least two sides to consider…

I have great respect for Stephen Greer, MD who at one point said that Luis Elizondo is “a professional disinformation agent putting out false intelligence on the UFO matter in [sic] through the mainstream media.”

To give you a glimpse of Dr. Greer, here’s a recent video interview that shows his speaking style and overall thoughts on UFOs. Historically, he has been an undeniable powerhouse in the UFO community. Even his zealous detractors give him that credit, unless they’re intellectually blind. He was able to collect hundreds of personal UFO-sighting testimonies from ranking military and government officials in an era when UFOs were considered total foolishness by almost everyone in the US. He convinced some of these witnesses to go on the record in a public “disclosure” press event in DC, each witness ending with a statement of willingness to testify to congress under oath. This kind of eye-witness testimony is the sort of evidence that decides murder trials, so it carried a great deal of weight with the relatively few of us who were scientifically objective enough to care about UFOs back in the dark ages.

Despite an authoritarian public speaking style that irks some people, Dr. Greer seems to me to be a sincere and courageous man doing his level best for UFO disclosure. And nobody’s perfect. MD’s in general are sort of programmed in med school and residency to speak in authoritarian tones that sound confident when they’re really not, which is most of the time in med school and residency. I sometimes wish I had absorbed some of that bluster, but no.

Anyway, knowing just what he’s been through in school, I find myself able to ignore it when Dr. Greer sounds pedantic and supercilious. Everyone needs to work on a balance in this arena of communication, I think, but unfortunately it’s not always just a matter of style. Beyond a shadow of doubt I’ve learned (in pathology practice) that sounding chronically overconfident leads to actually becoming overconfident for many diagnosticians. And overconfidence ruins a person’s objectivity and thereby her/his accuracy in determining the truth. I’ve seen this hundreds of times with everything from dangerously weak to world-class brilliant pathologists.

So in my humble and yet infallible opinion, the most vital skill for any truth seeker is objectivity, whether you’re struggling to come up with a rare tumor diagnosis or trying to evaluate an expert’s motivation.

Doctor Greer, God love him, seems to have made one unfortunate public mistake (that I’m aware of). It seems to have damaged his credibility far more than it should have…

One day in Florida during a CE-5 (alien-calling) group, each participant having paid thousands, he mistook a fairly obvious pair of flairs for two UFOs. The event is documented in this video. As far as I know, he still believes the two falling lights were UFOs.

Naturally, Dr. Greer’s detractors have latched on to this video and accuse him of hoaxing.

For what little it’s worth, Dr. Greer seems to me to be a person who would rather die than perpetrate a hoax. Of course, I’m not Richard Dolan, a seasoned ufologist and historian whose opinion should actually carry some weight in this arena. Richard, as I understand it, respectfully disagrees with Dr. Greer on some issues, but appreciates Greer’s important body of work and doesn’t consider him capable of anything approaching a hoax.

So let’s not be too black-and-white in sizing up Ufologists if we can help it, but honestly, here’s my strong opinion on Dr. Greer’s recent name-calling episode: If Luis Elizondo is a “professional disinformation agent,” I’m a helicopter.

I could be wrong. I often am. But it would make no sense to me the way the Pentagon has lied to the public in trying to discredit Lue. Also…

Listen again to Lue’s statement of his hope for humanity after real disclosure:

“Say… OK, we realize that there are things out there that are probably way beyond our petty discrepancies that we have with each other. Maybe we need to really start working together on this. Realize that we really are a global family. It doesn’t matter where you’re from, or it doesn’t matter what your religion is, your culture or your color or anything else. We are all brothers and sisters on this tiny little rock we call Earth, this pale blue dot that’s hurdling through space.”

Leu’s message here is as distant from the elite’s orchestrated hate machine as the east is from the west. I doubt that the unelected elites running the US government are a homogeneous group in full agreement on how to leverage the UFO reality, but I can pretty much guarantee you their big dream for us depends upon increasing, not reducing, the hatred and violence they’ve patiently fertilized and grown to anti-thinking fruition in the US educational system over the last fifty years.

I’m with Lue on this. Dr. Greer, incidentally, would probably be with him, too, if he heard this interview. Every thinking person I know agrees that we humans desperately need to rise above hatred and war if we hope to survive as a species.

If only we could all learn for ourselves what Luis Elizondo already knows.

One thought on “If Only We Knew what Luis Elizondo knows…”